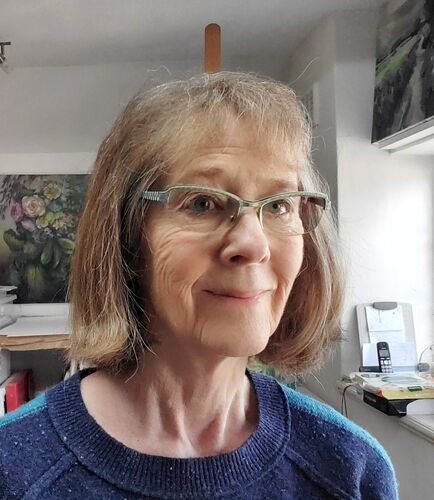 And every year I say I have never appreciated
until now, the way light coming through poppies
lasers straight to the heart and colours everything.
It also happens with green and blue.

from The Bird Garden, Maxwell's Rainbow 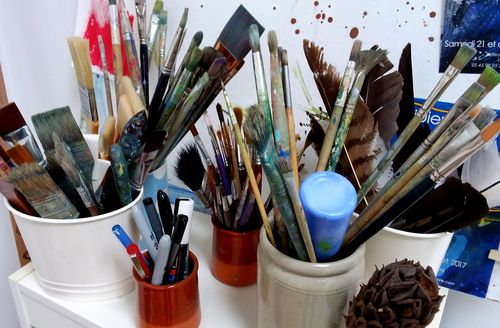 My first memory is dancing. My second memory is dressing up and writing plays. My third memory is copying a drawing of a weaselly creature on its hind legs, from a library book, one Saturday afternoon when I was ten years old. I remember the shock when it was finished, that it was so real, exactly like the one in the book. My first breakthrough piece! I've never grown out of wanting the where on earth has that come from? buzz. It's the high behind every successful painting.

Painting is a direct way to connect with whatever I'm looking at. You can't spend a chunk of time trying to draw something without it becoming special to you, so not just any old tree in any old field, rather that tree, there, in that field. Then, when things go well, the work can become more about that relationship and less about the object.

I usually start by layering and creating visual textures to create a ground with random marks and then study this proto-painting, looking for clues to possible images. I adore the frisson when I see a potential form or composition because this approach enables me to access new ideas with my mind's eye. Then the real work begins, emphasizing some areas, hiding others, always being receptive to new ideas as they come so that the entire process is one of discovery.

Painting hasn't always been at the forefront of my day (though it and writing have always taken first place in my heart). As an artist I'm self-taught. I had a science education and became a speech and language therapist, later a lecturer at the University of Sheffield and later still, a poet. It took a while but I came to understand that writing poetry and working with people who struggled to communicate the simplest thing, were not so far apart as I'd initially thought - both involve pushing hard at the limits of language.

I never personally thought science and art were far apart, except on school timetables and university degree programmes and eventually, via poetry, I was able to marry these two factions comfortably together in my head. As a writer whose themes are science and nature, I have published books and taken part in funded projects, performances, residencies and fellowships as well as teaching in a variety of settings. Details of the books can be found on the poetry page of this site.

Sign here for news of events, studio life and tips for artists