Behind the scenes or front of house?

Do you like watching documentaries that explain how the special effects in a film are done or.... 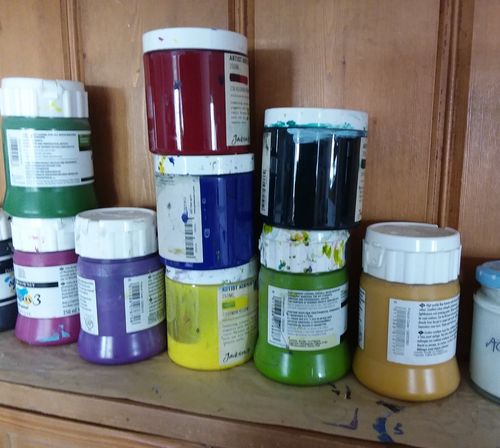 Do you enjoy those documentaries that show you how CGI and other astonishing effects are created on films? I'll confess they're not for me. I don't want to know how the castle melted, the crowd scenes were done or how many weeks of intense labour went into a 30 second flying sofa scene. I want the Marvellous Illusion. I want to believe, hook, line and sinker, for the duration of the film and preferably afterwards too and don't want it all unravelled a few years later. At concerts and the theatre, I’ve never been a programme reader - at least not until I’m having a cup of coffee next morning. I prefer to soak myself in an atmosphere and enjoy my uninformed reactions. Afterwards it's interesting to see if they are influenced by more details and other people's opinions. Are you a programme reader or a programme avoider?

So how weird that, when I think about paintings, the reverse is true. I LOVE seeing other artist’s studios. I want to see

what tools they use

how they stash their paints,

what they've got on the go

what's on their reject pile

or are they blessed creatures who rarely have days where a lot of expensive paint ends up in a squidgy heap of screwed up paper towels?

I regard it as a privilege to be invited into someone's studio because I know it's their head and heart space, a container for private highs and lows, as well as for just knuckle-down-and-get-on-with-it days. Seeing all this energises me and makes me keen to get back to my own work space. On most mornings my studio door is firmly closed as creating needs plenty of uninterrupted time and solitude but I'm always pleased if someone asks to see where I work.

In summer I work a lot in France, I'm here now and I can look out over the garden to fields which, in a good year, will be sunflowers, otherwise wheat or maize. It's fairly functional (trestle tables, a bookcase, Ikea storage unit, a picnic chair and a stool with a cushion tied on with tape) as there aren't many surfaces and French houses don't have windowsills like English houses do. On the other hand it is a joy to be able to work with wide open windows!

When you enter my English studio you will get a view over fields, sheep, the church spire and hills above Millers Dale or nothing at all in midwinter when the house is cushioned in cloud. There's a dresser crammed with pots of brushes I've collected over 20 years, drawers of paints, CDs and sketchbooks. An ex-oven door serves as my palette and canvases in progress are hanging on the walls. A big mirror lets me look at work on the easel back to front and from a distance. On the wide window ledge is a big stone jar of flutes and whistles from around the world, an incense burner from Somalia, a clay dragon from Samarkand, a Masai herdsman and a terracotta warrior. There are two big bookshelves with art books and admin files. Of course I'd like more space, who wouldn't. I'm not a tidy painter but I do have a sort out once a year which is satisfying but I'd rather it happened all by itself! Oh, and a lot of buckets in both places as I don't have running water. 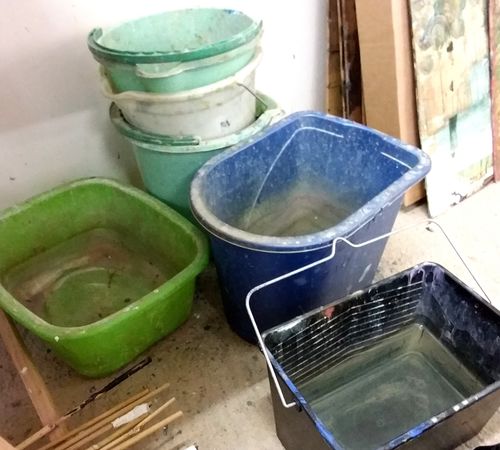 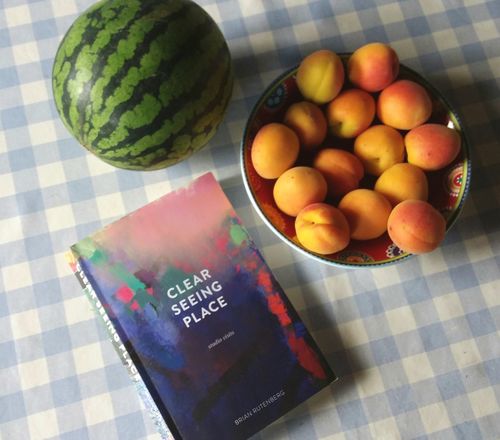 I've just finished reading Brian Rutenberg's Clear Seeing Place (pub: Permanent Green) for the second time. Brilliant, probably because I agree with practically everything he says! Short essay sections about his experiences in the gallery world, studio practice, and general art practice wisdom. I don't often re-read books so this gets three stars easily. He can write too. A joy.
Next
Previous