making the most of your imagination 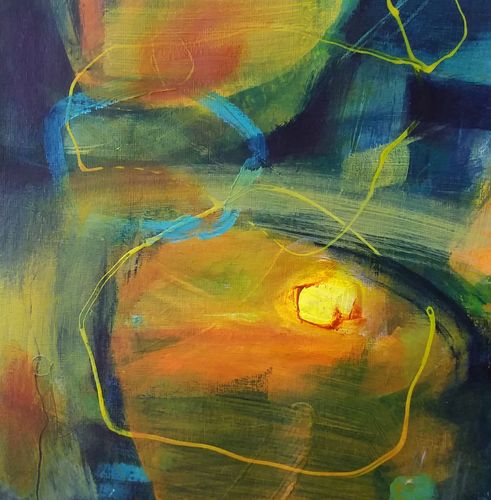 On and off this past year, I've been dipping my toe into the waters of abstraction though the results at the moment simply fill a couple of sketchbooks. Trying not to get seduced by things I ‘see’, especially in the early stages, has proved to be a major problem. My imagination works against me and I have to actively sabotage images that begin to build (and deal with the regret of the road not taken). Even so I expect at some point someone will come along and say “There's a duck by that blue bit”.

It's taken me a long time to realise that no matter where I'm working on the abstraction/realism continuum, what I like doing best is making things up, surprising myself by discovering images I didn't know I could see. I can hear you say "Surely all painting is from imagination, everytime we adjust the shape of a tree or miss out a telegraph pole we step away from reality”. Which is true. At the other end of the spectrum, for millennia humans have tried to paint things that don't exist at all in the real world: Gods, Goddesses, monsters, spirits. How glorious to design the creatures in Harry Potter. Could you design a Dobby? Where would you start?

Dreams and daydreams are the common access roads into our inner vision. At the age of seven I would take myself off to bed early to have time to mentally replay a film I'd just seen on TV before I fell asleep. The point of this, apart from re-casting myself as the heroine, was to adjust the ending and other unsatisfactory sections, to my own preferences.

Everyone has a good imagination because being able to play different scenarios in your head and fantasise strategies for dealing with them is a key survival skill. We see castles in clouds, faces on trees, in fact it's hard not to. Having said that, imagined objects are rarely fully formed: what is the exact position of the little finger of the left-hand as someone gets out of a chair?

We usually think of our inner world in visual or verbal terms but we can summon up other sense impressions. We 'hear' sounds (something Beethoven relied on for his later works), smells (often harder to do), touch things (imagine stroking velvet), taste things (close your eyes, spend a couple of minutes thinking of cutting a slice of lemon, bring it slowly to your mouth and suck. Has your mouth flooded with saliva? This is a physiological response to an imagined stimulus.) We also conjure feelings.... imagine something sad, annoying or funny and the relevant bodily sensations will manifest. How to give a visual form to these intangibles is another challenge artists take on.

However making things up is hard work and I'm always excited by methods that give our imagination a helping hand, which is essentially what is happening in the case of trees and clouds, they provide us with raw material our brains can't resist trying to make sense of. Poets and novelists have a myriad games for generating fresh images, meanings and subtexts, to be found in any book of creative writing exercises. As artists, we too have whole battery of tricks and devices we can use to supercharge our imagination and flesh out an image, whatever our skill level. Here are some of my favourites:

Gainsborough made model landscapes so he could paint from ‘life’ in the comfort of his studio. I tried it once and asked a class to bring in moss, stones, branches, broccoli and anything else that might be useful. We constructed an epic landscape on a table and worked from that. By the end of the morning noone wanted to dismantle it. And the light stayed constant, we were warm and dry, with all our materials to hand and cups of coffee on tap.

The Surrealists juxtaposed disparate elements leaving the viewer to infer connections - something else our brains can't refrain from doing: a mackerel is lying on the ground next to a charred birthday cake and a packet of bird seed underneath an oak tree. How did they all get there? Give it a minute's thought and you'll have cracked it.

A painter I like, Max Ernst, used frottage, printing, stamped textures and various random paint effects to invent his discomfitting landscapes. We can add to those techniques collage, enlarging photocopies, turning existing images upside down, doodling, automatic drawing, blind drawing and throwing paint onto the canvas to name a few. 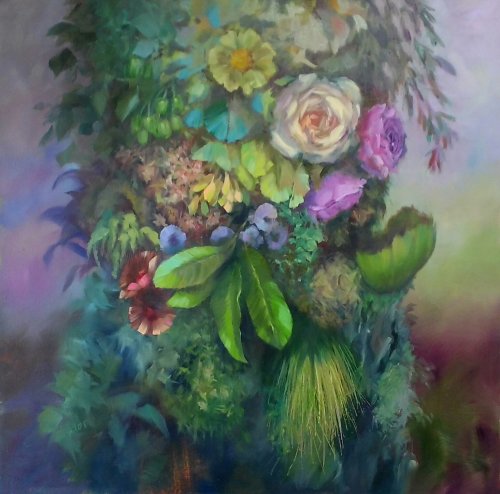 I've not found a technical name for the process I employed to make Tree Life, above, so have called it assembly: in a realistic style I painted flowers, leaves and other natural elements from life, to construct a form as I went along, that doesn't exist in nature. Given that nature is the biggest inventor of all, in some still, secret corner of some remaining jungle in a near or far country, who's to say.....

The ability to live two realities, a real-world outer, (whatever 'real' may turn out to be) and a complex, inner life at the same time, must be one of the most intriguing achievements of our minds. How lucky we are, as artists, as humans, to be able to wander around in that territory whenever we wish. 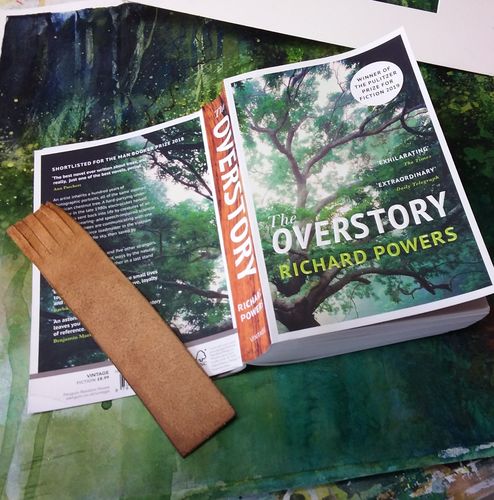 ‘How life managed to add imagination to all the other tricks in its chemistry set is a mystery Dorothy can't wrap her head around. But there it is: the ability to see, all at once, in all its concurrent branches, all its many hypotheticals, this thing that bridges past and future, earth and sky.’

I usually give you an art book in this slot but in the long, sleepless watches of last night, I read that sentence and sometimes you have to just go with what's presented.....
Next
Previous